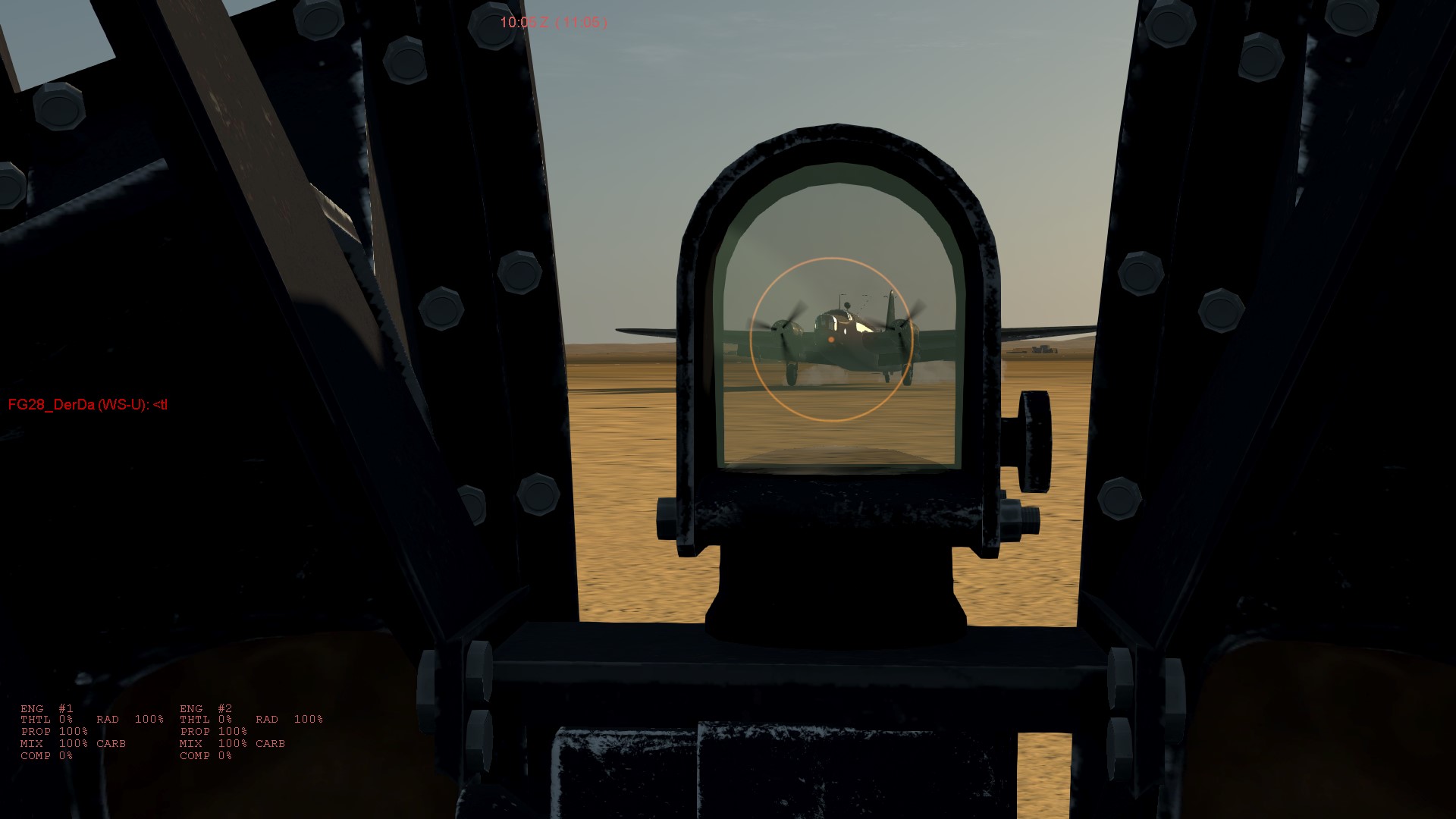 Today the Wimpey OTU FG28 (aka „Lila mit orangefarbenen Punkten Section“ within the newly established Wimpey squadron 149 at ATAG) has started its hard training to commence operation against the blue evil Schnapsdrinkers on the other side.

Four enthusiastic Wellington pilots of FG28, normally heavily engaged in low level strikes against said schnapsdrinkers, were choosen to start their conversion training to the black magic of level bombing. In true FG28 spirit all four stepped forward as one man when volunteers for the role as lead bomber were needed. In the end Sq Ldr Kayo was choosen to take responsibility to get the lot to the target and back.

Ok gentlemen, let’s start your engines (and for gods sake, don’t touch the brakes when taxing!).

After take off  (the leader strangely enough taking off last) the 4 bombers assembled loosley in a big circle around Scegga airfield and then slowly climbing went out on a heading of 273 deg towards Almiah al-Khafaia airfield, target of the day. After establishing a comfortable climb attitude with 2150 rpm and 1½ lbs boost, DerDa, Dostal and Matkenhauser (all Sq Ldrs) tried to tighten the formation while flight lead was looking for some hints in the desert if the section was on the right track. With roughly 400 fpm and 150 mph our bombers droned on westwards. Soon there should be a road crossing from south to north. Ah, flight lead forgot of course to write down the take off time. And no, is the visibility from the Wellington up here really so poor? Neither the bomb aimer nor the front gunner in the lead bomber spotted the road. Thankfully one of the other bombers did even if the boyz were very much occupied in the hard work of keeping formation.

Final verdict lesson 1: well, it is not that easy to keep formation but the low power setting and the wide circle after take-off made it work quite well in the end

Lesson 2: Find the target and establish a good bomb run while keeping in formation

After leaving the road as our first checkpoint we had a relatively comfortable period in the mission, we knew we are on track, keeping formation in a steady climb works quite well, power settings well in the green for the engines and all happy on board. Ten minutes later the skipper in the lead bomber gets a bit nerveous, are we really on track? When is the target showing up? Will we cross the road leading to the target without noticing? Have I switched off the toaster back at home? Tensions starts to raise when we level off on our bombing hight of 10000 ft. The AP is not really doing a good job today and we loose much more than the assumed 1000ft. In the process the formation gets a bit looser. But finally an airfield appears on our 11 o’clock. Question is: is it the right one or the one further to the south?

Flight lead decides to circle the field in a wide turn and fly a bit soutwards to see if the field further south gets visible. Here trouble begins to keep formation and the AP is now really not keeping the correct alltitude anymore even if the leading bomber is just using the AP to turn ever so slowly. Definitely more testing needed. We cannot see any AF further south so we assume that the AF in sight is not the target and we decide to follow the road in north easterly direction. We pass the AF and get some flak, maybe anyway the right spot? Too late we are not prepared for bomb drop, so lets continue north and 1. assure it was the target and 2. get a got bomb run along the road as reference. Five minutes to the north we start a tear drop reversal as we now have decided, the AF we saw IS the target. This time we do not really manage to keep the formation together but after aligning with the road we have luckily enough time to tighten up again. Bomb doors open! Target in sight from the front gunner in the lead bomber. Section in line astern! 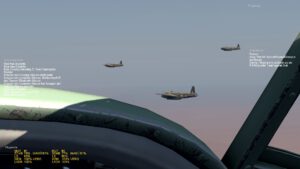 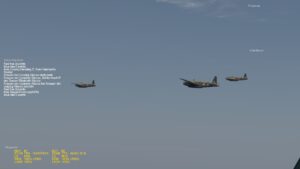 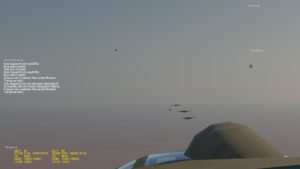 Target destroyed! Our last doubts if it really was the right AF are gone. Now bomb doors closed, turn 93 deg for home.

Verdict on lesson 2: Well, turning in formation needs some practice even with very low turn rates. A good referance for the bomb run really helps a lot. Some intelligence information about the target to make it easier to identify would help.

Easy told. We got home. Ok, 3 of 4 got home, the skipper of the lead bomber was so relieved that we found and hit the target that he must got completely drunk and choose to abandon the ship and dissapeared in the desert or maybe the root cause could be hitting accidentaly the key to give AI control of the a/c while in pilot seat?

Nevertheless Kayo continued in DerDas front gunner position and was able to see the others landing. 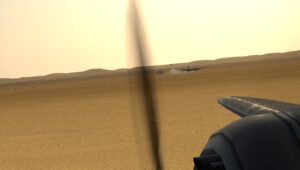 What a relieve and what a fun 2h mission!

It is fun. A small unit of 4 A/C is hard enough to keep together. Flight lead is quite a challange, we think about having 2 persons in the lead bomber to share the work load. Keeping formation during turns needs more practice. AP usage needs to be optimized. Choose your targets wisely in terms of navigation and how to do the bomb run. Do not press the wrong keys. Make sure to install a timer on the toaster back home so you do not need to think about that in the middle of a mission to hell.