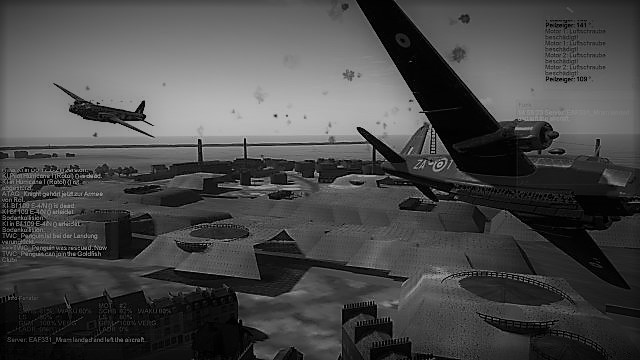 Yesterday a detachment of no 9 squadron undertook a daring low level raid on the enemy industrial centre at Boulogne.

4 Wellingtons of the latest model were moved from their base in the Western Desert to RAF Coltishall for Operation Cloudstriker. RAF Bomber Commands most experienced squadron was choosen for this special daylight strike against oil-installations and a German jamming station. The Wellingtons were protected by a specially trained fighter ace in Fighter commands most advanced Spitfire.

Wg Cdr DerDa was the head of this cunning plan and handpicked the crews for the other 3 Wellingtons on a mission where chances to survive were as low as the altitude the planes would take on the strike. Fate struck already early in the raid when shortly after assembly in formation Sqn Ldr Dostals Wellington plunged into the grey water of the channel during a a tactial maneuver, all on board where killed but their faith was with the remaining 3 bombers.

Shortly after the first enemy interceptors were sighted but the wave top flying paid off and no damage was done by the fighters before Wg Cdr Artist was able to terminate the German attack with some bursts from his Hispano armed Spitfire. Rounding Cap Griz Nez the target appeared on the horizon. „Bomb doors open“ the command yelled over R/T. Heavy and medium flak opened up on the small strike force but the pilots kept their aim with nerves of steel determined to proof that Sqd Ldr Dostals dead was not in vane. The targets were now clearly identified, Wg Cdr DerDa commenced the attack with a stick of 9 500 Punders on oil installations in the western part of Boulogne harbor, followed by the same load of bombs from Sqn Ldr Kayo and Sqn Ldr Ceaser on the jamming station and further oil installations.

The blow to the surprised enemy was devasting but now the light flak took its toll and still over the target Wg Cdr DerDas Wellington was badly hit making the way home to fight against a dying bomber. Now without the fighter escort and alarmed by the events in Boulogne the Luftwaffe started to mix it up with our bomber boys. Both Sqn Ldr Kayos and Sqn Ldr Ceasers Wellingtons were hit by 109s and ditched into the see, both crews becoming PoWs. Later it was confirmed that both bombers fell victim to one of Luftwaffes most credited pilots from 9/JG52 Oberleutnant Pans. The final blow for No 9 Sqn came when Wg Cdr DerDa, already wounded lost the fight with his badly hit Wellington and came down in the Channel.

A costly undertaking for Bomber Command that lost 4 of the most experienced crews in Operation Cloudstriker but a hard lessons for the Germans that they are on risk at day and by night. Surely the crews will be proud to learn that all of them earned a imidiate DLC for their sacrifice. Jolly good show, boys!

The picture is taken from Wg Cdr DerDas Wellington shortly after bomb release showing Sqn Ldr Kayo and Sqn Ldr Ceaser in the thick flak over the target.